The onset of the COVID-19 pandemic has generated and exacerbated copious problems in the world. Since the outbreak, the world has been facing social, economic, psychological, and racial issues among many other factors. However, one critical problem that needs our attention is the snowballing number of sexual abuse reports. As various countries across the globe impose different measures of lockdown such as school closures and curfews, both the perpetrator and the victim are forced to stay at home for a longer period of time. This increases the likelihood of the victims staying at home with abusers, and the accretion of sexual abuse reports. This supposition was made by the UN Secretary-General in a report about the increase in sexual violence in some countries. In France, government authorities reported that in just one week domestic violence increased by over 30 percent in areas under movement restrictions. In China, the media reported a surge of domestic violence under the mandated COVID-19 quarantine. In the United States, a Texas hospital reported treating six children under the age of four who had been severely physically abused for one week.

Three months ago the head of Addis Ababa Women and Children reported that 101 children were raped and sought medical care since the COVID-19 outbreak.

Unfortunately, Ethiopia is no different from the above countries mentioned; it has its own fair share of this particular problem. On June 2, the head of Addis Ababa Women and Children reported that 101 children were raped and sought medical care since the COVID-19 outbreak. On June 3, the Tigray Regional state reported that 103 women and 2 men were raped. Shortly after this information was aired on Walta TV, a plethora of people including artists started crowding social media castigating the crime and demanding justice for these children. However, Meaza Ashenafi, the President of the Supreme Court, disclosed that none of the cases have reached the courts within the last two months. This information put the public in a complete confusion and incremented the interest of the public on the matter. As a result, numerous individuals were voicing their confusion, frustration, and advocating for justice for the victims using their various platforms. Particularly Meaza’s tweet on June 5:

The above tweet was met by great frustration and puzzlement. Despite the great efforts, and a bundle of questions by the public after the tweet, the Ministry of Women, Children and Youth, the Supreme Court, our Prime Minister Dr. Abiy Ahmed and other concerned government bodies were almost in complete silence for three weeks until the  Attorney General Adanech Abiebie disclosed that 40 charges and 8 decisions were made from rape cases within the last three months.

Initially, the Attorney General Office showed some degree of commitment to delivering justice for the victims by charging 40 individual cases, and passing 8 decisions. However, its dedication seems to have vanished over time. For the last several weeks, the Attorney General office which has been updating the progress of the rape cases to the public has not made any new public statements regarding the victims.

Caught up between celebrating Grand Ethiopian Renaissance Dam (GERD), and mitigating the ethnic conflict, the Attorney General office seems to have become oblivious to the sexually abused children.

But, we should all be aware the goverment hasn’t disclosed any information regarding the investigation, or the court proceedings about the 40 cases that were filed, and there are at least 61 rape cases that haven’t reached the courts just in Addis Ababa.

On the other hand, the increase of reports of child sexual abuse in Ethiopia has initiated a robust movement called #ዝምአልልም (meaning I will not be silent). As the founder of the movement Mekdes Tsegaye articulated with her interview with #MeTooEthiopia, she said the movement aims to be the voice for the voiceless children subjected to assaults and violence. The movement has been involved with the community in Addis to increase its awareness about Rape and other Gender-Based Violences (GBV). It has also been educating the community about preventative measures to avoid the crime by initiating a conversation between adults and children about sexual violence, which is usually a taboo topic in the community. Moreover, the movement has been able to provide counseling opportunities for children at the Integrated Family Service Organization (IFSO) by collaborating with Aha psychological services. So far, the group has raised around 250,000 ETB ($6,000 dollar) and donated it to IFSO. Furthermore, the #ዝምአልልም movement has managed to get 70,000 people to sign a petition and is currently working with the ministry of peace to provide training to increase the sensitivity of police, and other professionals when dealing with GBV victims.

As stated by Mahlet Ali, a member the network, The Network of Ethiopian Women Association (NEWA), has organized a press conference raising ten concerns to the government . It has also created a working group that aims to do in depth research on Gender-Based Violence in Ethiopia and designed a media strategy to mitigate the problem.

In addition to these efforts, #MeTooEthiopia has also been trying to address this issue through their social media by raising questions, campaigning, and developing other contents including the article entitled “The pandemic is currently less of a threat than the violence perpetrated against women and children”.

"The majority of rape victims prefer to suffer in silence. Yet, after the outbreak of the pandemic, the number of rape reports that keep reaching our ears is alarming" 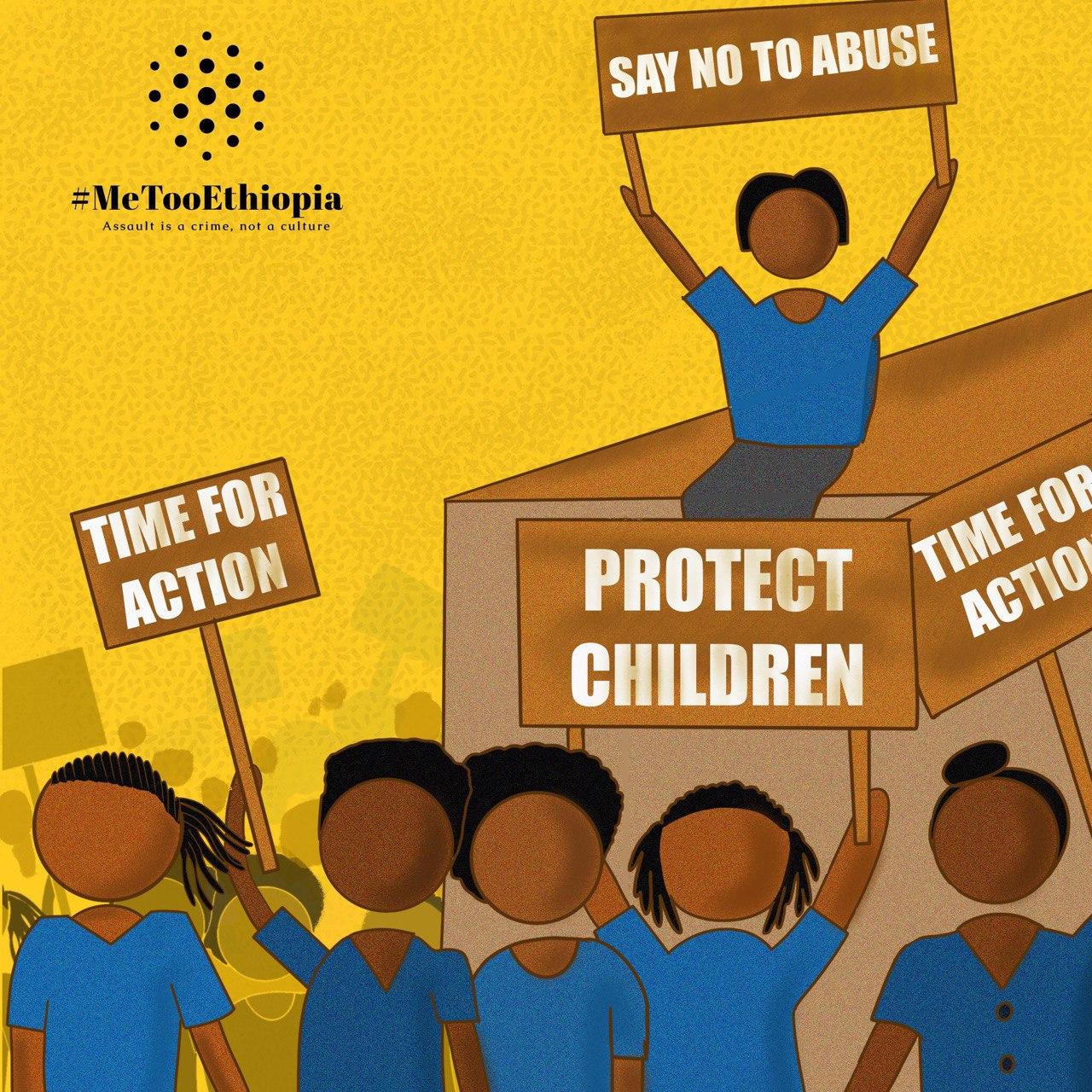 It is important to acknowledge the effort and gaps in getting justice and due attention to these rape cases both from the government and from non-governmental groups that are interested in addressing this issue. However, it is also crucial to raise questions & concerns and start conversations so that we have a thorough understanding of this problem in our country. It is obvious that our culture does not applaud rape victims who speak out  their assault, and blaming the victim is very typical in our country. Moreover, limited actions are taken to address this issue. As a result, the majority of rape victims prefer to suffer in silence. Yet, after the outbreak of the pandemic, the number of rape reports that keep reaching our ears is alarming. This makes it easy to imagine the countless number of unreported rape cases that exist in our country right now. How many of the cases do we actually know about? How many of the cases are still unreported? How many of the victims have access to or know about the medical help one-stop centers provide? We should ask these questions to truly grasp the magnitude of the problem in our country.

Our second question should be directed to one-stop center professionals. One-stop centers are centers that provide medical, psychological, and legal aid for rape victims. It seems like the cases of the rape victims, who went to the centers within these three months were not transferred from the legal offices of the one-stop centers to the court. Could it be that legal departments in these one-stop centers are not performing their responsibility? Is there lack or resources or motivation? Or Is there a structural problem between these legal departments and the courts? Maybe it is the lack of evidence from the victims to make a case or the disinclination of the victims to file a complaint against the perpetrators. We should voice this questions to comprehend the origin of the problem in delivering justice for the victims.

The other detail we all should pay attention to is the fact that more than half of the perpetrators are still out there. We still do not know if these criminals are arrested, out on a bail or if they disappeared. As far the public knows, there are at least 61 rapists in our community living amongst us.  Indeed, there are 40 cases that have had the chance to see the day at courts. However, there is no information about the investigation, legal proceedings, and court hearings about these cases as well. If perpetrators do not receive the punishment their crime deserves, our community including the criminals themselves will not take the assault as a serious matter. If the government doesn't take the necessary action or show it is taking the proper reaction, wouldn't this encourage more perpetrators?

The repercussions of the government action has a robust negative effect on the victims as well. For instance, the traumatic experiences of rape are far-reaching and can not be quantified. The aftermath of rape involves a cluster of psychological effects such as depression, anxiety and flashbacks. This makes victims highly vulnerable to any negative environmental cues or gestures. As a result, when victims realize that the government that was supposed to protect them is not taking the matter seriously, it might increment the negative psychological effects of their assault. Moreover, the Ethiopian society has propensities to blame the victim rather than the perpetrator. This usually causes great GUILT in the victim's mind about his/her assault. As a result, the lack of interest by the government to take action against these criminals and force them to take responsibility for their actions can convince victims that they are responsible for their assault, and heighten their guilt.

The other actuality that should get our scrutiny is the fact that the Attorney General has disclosed that there have been convictions and sentences on some of the perpetrators . However, the office has left out numerous details about the report, investigation, court proceeding and convictions. Yet, we can clearly see the General Attorney showing full transparency when handling other criminal cases, especially those who have been arrested after the corona pandemic. So why are the perpetrators' identities still kept in the dark? Are we still protecting these convicted criminals? We should also ask how sure we can be that the criminals that got arrested, will complete their sentences? How do we know that they are not going to be set free without serving their time?

Lastly and most importantly, we should recognize that we are part of the problem, and direct questions to ourselves as well. How are we perpetuating Gender-Based violence in our society? How many of us accept and reinforce cultural norms that dictate that men are aggressive, controlling and dominant, while women are docile and rely on men as providers? How many of us talk about GBV freely or encourage others to speak out? We commonly hold the government responsible, but we should also be able to recognize that we are part of the problem too. We teach our boys to be aggressive and teach our girls to be docile. As a consequence, we have a generation that doesn't value consent. Moreover, our society inclines to keep sexual assaults as secret and private. This creates an environment in which criminals get away with their crimes easily.

Over 100 Children raped in Ethiopia during pandemic

Talking about sexual assult in churches